Bernie Sanders shirts have arrived!  Bernard “Bernie” Sanders (born September 8, 1941) is an American politician, serving as the junior United States Senator from Vermont since 2007. Sanders is the longest-serving independent in U.S. congressional history. He has always caucused with the Democratic Party, which has entitled him to committee assignments and at times given Democrats a majority. Sanders became the ranking minority member on the Senate Budget Committee in January 2015; he had previously served for two years as chair of the Senate Veterans’ Affairs Committee. He publicly identified as a Democrat during his campaign for the party’s 2016 Presidential nomination, but has announced he will return to the Senate as an independent.

[3] A self-described democratic socialist, Sanders is pro-labor and emphasizes reversing economic inequality.[4][5] Many scholars consider his views to be more in line with social democracy and New Deal-style American progressivism than democratic socialism.[6][7] 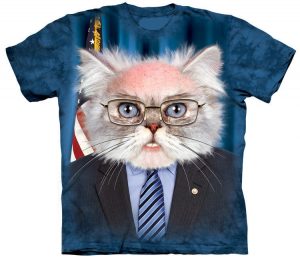 Sanders was born and raised in the Brooklyn borough of New York and graduated from the University of Chicago in 1964. While a student he was an active civil rights protest organizer for the Congress of Racial Equality and the Student Nonviolent Coordinating Committee. After settling in Vermont in 1968, Sanders ran unsuccessful third-party campaigns for governor and U.S. senator in the early to mid-1970s. As an independent, he was elected mayor of Burlington—Vermont’s most populous city—in 1981, where he was reelected three times. In 1990 he was elected to represent Vermont’s at-large congressional district in the U.S. House of Representatives, where he co-founded the Congressional Progressive Caucus in 1991. He served as a congressman for 16 years before being elected to the U.S. Senate in 2006. In 2012, he was reelected with 71% of the popular vote. Several polls indicate that he is among the senators most popular with their constituents.[8][9]

Sanders rose to national prominence following his 2010 filibuster against the Middle Class Tax Relief Act of 2010, which extended the Bush tax cuts for the wealthiest Americans. By favoring policies based largely on the Nordic model of social democracy and Franklin D. Roosevelt’s New Deal, Sanders has built a reputation as a leading progressive voice on issues such as campaign finance reform, corporate welfare, global warming, income inequality, LGBT rights, parental leave, and universal healthcare. Sanders has long been critical of U.S. foreign policy and was an early and outspoken opponent of the Iraq War, the First Gulf War, and U.S. support for the Contras in Nicaragua. He is also outspoken on civil liberties and civil rights, particularly criticizing racial discrimination in the criminal justice system as well as advocating for privacy rights against mass surveillance policies such as the USA PATRIOT Act and the NSA surveillance programs.

Sanders announced his campaign for the Democratic presidential nomination on April 30, 2015. He became the first Jewish American to win a Presidential primary contest when he defeated eventual nominee Hillary Clinton in New Hampshire on February 9, 2016. Initially considered a long shot, Sanders won 23 primaries and caucuses and approximately 46% of pledged delegates to Clinton’s 54%. His campaign was noted for the enthusiasm of its supporters, as well as his rejection of large donations from corporations, the financial industry, and any associated Super PAC. The campaign instead relied on a record-breaking number of small, individual contributions. On July 12, 2016, Sanders formally endorsed Clinton against her Republican general election opponent Donald Trump, while urging his supporters to continue the “political revolution” his campaign had begun. He has started a successor 501(c)4 organization, Our Revolution, to recruit and support candidates for local, state, and national office. He has also announced the upcoming creation of The Sanders Institute, which will promote his policy agenda through documentary films and other media.[10]